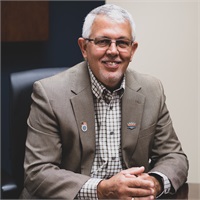 Prior to becoming a Financial Advisor, Brad served in the United State Air Force from 1979-1987. While on active duty Brad had trained in civil engineering, electrical power production and aircraft barrier systems. Throughout his experience he was stationed in many different places, including, Texas, Virginia and the Netherlands! Brad closed out his military career with two years in the Reserves.

Even though his duty in the USAF ended, his love for aircraft was still alive. Brad earned his pilot’s license in 1986 and finished building his very own helicopter in 2016. On a nice sunny day, you can see him flying over Canandaigua, Penn Yan, Macedon and surrounding towns! Brad is married to his wife, Cindy, and they have been blessed with four children Amanda, Matthew, Rebekah and Jacob.